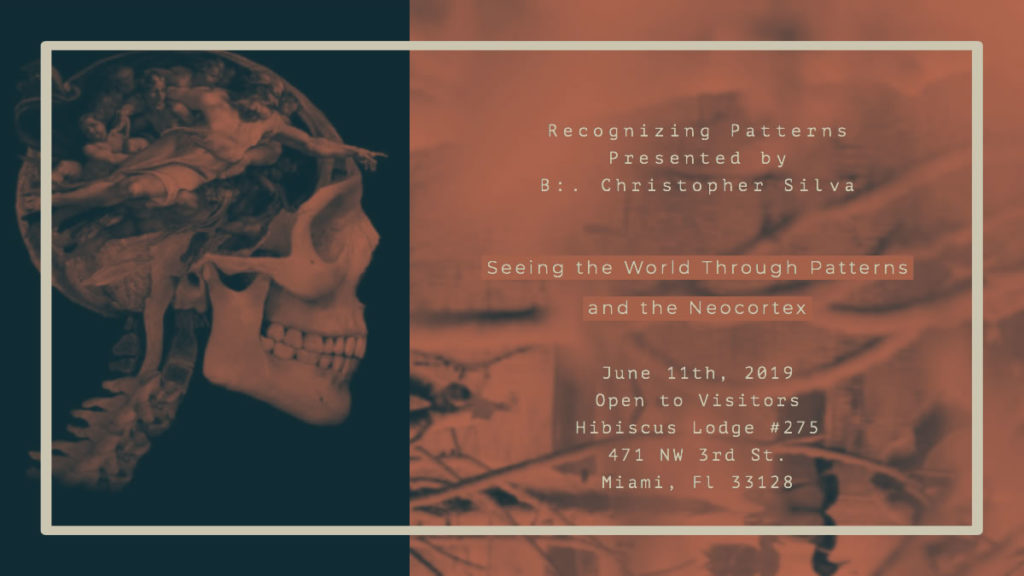 As a newly raised Master Mason I know my journey in Freemasonry has just started. One of the most common explanations of Freemasonry I’ve read and heard from brethren is “ Freemasonry is a peculiar system of morality veiled in allegory and illustrated by symbols”. Recognizing patterns is an important ability while I’m going through my journey learning how beautiful and peculiar Freemasonry really is, in my humble opinion. Patterns are powerful. They set up expectations, inspire questions, and make connections. Compared to all mental abilities, pattern recognition is said to have the highest correlation with the so called “intelligence factor”. This is a remarkably vast subject that I can not cover in a short time, however I will give you a brief glimpse on how we see the world through patterns, how its plays an important role in my understanding of Freemasonry, and what makes it all possible the neocortex.

Recognizing a pattern is like looking through a telescope for the first time. When you see a pattern, it can change your life. As I reflect on my journey through the first three degrees in Freemasonry, pattern recognition helps me find something new in each of the degree’s. Pattern recognition was key to the survival of our Neanderthal ancestors, allowing them to identify poisonous plants, distinguish predator from prey and interpret celestial events. Pattern recognition is an ability we frequently use in Freemasonry from memorizing our catechism to helping understand, decipher, or interpret degrees and symbols. Patterns can be relationships that create new connections or they can merge from seeing the larger picture. Most brothers can agree, as you dig into each degree, its catechism, or symbolism you find more connections that merge to make a larger picture and some inspire more questions. For example, a circle is a symbol of infinity and/or Deity so is the cross, the fourth part of a circle is a right angle and the cross has four right angles, which makes a square or cube also known as to us an Ashlar.

Something extraordinary about our brain is that it’s wired to recognize patterns, so everyone has the potential of being pattern smart, in many and different ways. When it came to learning our catechism, pattern recognition was an important ability in my memorization. People who are numbers smart, can predict from a series of numbers what the next number will be. People who can visualize an object in three dimensions are visually smart, in my case this helps me relive the degree’s, increase my understanding of what I went through, and has helped me learn my catechism with proficiency thus far. Those of you who recognize a species of bird from its flight pattern, you may be nature smart. Just to make it a bit more interesting, I’m going to ask you visitors and brothers a few questions, for the propose of testing yourself if you are people smart based on couple of human behavior patterns. Can/Do you…

• Predict from reading body language and facial expression what someone is thinking?
• Distinguish a fake smile from a genuine smile?
• Predict accurately from reading one’s face wether someone is telling the truth?
• Identify from observing a child’s social interaction that a child has special needs?
• Perceive how peer pressure influences buying habits?
• Identify someone just by someones body posture and the way they walk?
• Recognize how and why pharmacies and supermarkets are organized the way the are?

If you answered yes to most of these questions, you may be people smart. People who excel at deciphering the meaning of human behavior patterns are people smart. As I stated earlier my journey in Freemasonry has just begun, there is just so much information to gain. The ability to spot existing or emerging patterns is one of the most critical skill in decision making, which helps shape our personal morality. Pattern recognition according to IQ test designers is “key determinant of a person’s potential to think logically, verbally, and numerically” as we need for the seven liberal arts and sciences . Symbols and allegories are all part of this beautiful system of morality, and pattern recognition is an important ability used in understanding it deeper. How is this ability all possible? It all starts with the neocortex in the human brain, 300 million pattern recognizers. I have a short part of aTED talk video with Director of Engineering at Goggle and author of How to Create a Mind- The Secret of Human Thought Revealed Ray Kurzweil. He will briefly describe much better than I can, how the neocortex makes this all possible.