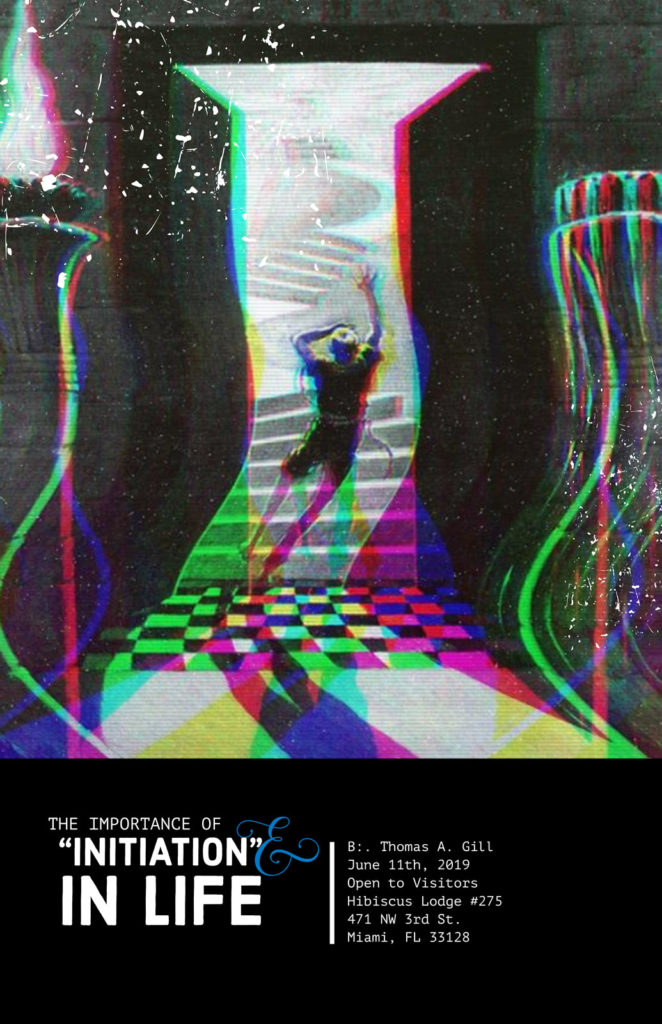 An initiation rite is a ritual or ceremony marking entrance or acceptance into a group or society. In modern society, initiation ceremonies usually mark the transition into adulthood, as demarcated by the community. Examples of such ceremonies include the Catholic First Communion, the Jewish Bar and Bat Mitzvah, military initiation, acceptance into a fraternity or secret society, graduation from school or even initiation into a gang. Initiation rites are an integral part of traditional societies and even more important in the male gender.

Famous historian of religion, Mircea Eliade, wrote in his book Rites and Symbols of Initiation that “…in the modern Western world significant initiation is practically non-existent.” Eliade defines an initiation as a “body of rites and oral teachings whose purpose is to produce a decisive alteration in the religious and social status of the person to be initiated. In philosophical terms, initiation is equivalent to a basic change in existential; the novice emerges from his ordeal endowed with a totally different being from that which he possessed before his initiation…”

Sam Woolfe in his paper The Psychology of Initiation Rites points out that for many people living in modern society, religious initiation rites – such as baptism and the Bar Mitzvah – feel devoid of their original sacred meaning, carried out purely in the name of tradition. Initiation rites in traditional societies, on the other hand, play a key role in introducing the initiate to the spiritual values of the community. He or she learns the sacred myths and traditions of the tribe, the names of the gods and the history of their works. The initiate also learns about how the tribe possesses a mystical connection to these gods, a connection which was established at the beginning of time. Thus, these ceremonies introduce the initiate to a sense of the world as ‘sacred’, whereas for modern societies, our equivalent ceremonies are more superficial, carried out for tradition’s sake, with no real sense of the ‘sacred’ attached to the ritual.

It is believed this “watering down” is due in part to the diversity and the “melting pot” mentality of modern cultures where many traditions such as initiation rites, are altered to avoid offending any initiates raised with more Western European ideals.

So, why is it important?

As social animals, we have depended on group affiliation for survival and today we depend on it for our own well-being. It is easy to see, then, why initiation rites have been so widely practiced and why they still persist in modern society. Perhaps it could be argued, however, that the loss of meaningful initiation rites in modern society partly explains why so many individuals feel isolated and cut off from any sense of community. Ram Dass writer of the essay Psychedelic Rites of Passage argues that we are a deprived society in terms of spiritual rituals and uses the example of his own Bar Mitzvah, which he said he performed mechanically and superficially.

Woolfe goes on to say that “it is not only the teaching of the group’s sacred history which imbues the novice with a sense of the sacred but also the series of ordeals they have to go through. As Eliade puts it, “And it is primarily these ordeals that constitute the religious experience of initiation – the encounter with the sacred.” The ordeals are, more often than not, symbolic of one’s death followed by one’s resurrection or rebirth. Initiation rites symbolize the death of the novice (marking the end of childhood, ignorance and the profane) as well as the rebirth of the novice (marking their return to the tribe with another mode of being). This death-rebirth ritual is also a symbolic microcosm of the society’s creation myth – the symbolic repetition of the creation myth is intended to foster the presence of the gods. In initiation rites, ‘death’ corresponds to a temporary return to the primordial Chaos out of which the universe was born, while ‘rebirth’ corresponds to the birth of the universe. Out of this symbolic re-enactment of the creation myth, a new individual is born.

It has been shown that these types of initiations are extremely important for men.

Michael Formica, a psychotherapist, teacher and writer for Psychology Today, states that “men generally have two speeds – neutral and pissed. This circumstance is consequent to the simple fact that men are not taught to access their emotions. The larger context of this condition is that men no longer have an experience of initiation from boyhood into manhood. Plainly put, boys will be boys and men will be boys — because no one is there to teach boys to be men.”

Supporting this theory, three Dutch Scholars, whose names I cannot pronounce, demonstrate that “when males are confronted with real initiation situations, or when they anticipate such situations, a threat-affiliation sequence will apply, activating a need for comradeship in them that subsequently fosters their feelings of group belongingness”.

Formica continues that “Men, since the Industrial Revolution, have lost the elements of their socialization that spoke to similar social rites of passage. With the father, or father-figure, working outside the home and the tradition of apprenticeship all but lost, boys have coincidently lost the context of their own manhood. Leaving them with no sense of place, and so, no point of reference for a genuine sense of self other than that sense of self that is attached to the roles laid out as socially appropriate. Fold in to this the mixed messages of gender socialization fostered by the feminist movement and men find themselves not only not knowing where they belong, but also not knowing who they are or even whom they are supposed to be.

All of this feeds into covert male depression that is so prevalent in post-modern society. Since depression in men often presents as anger and irritability, the sullen, cave-dwelling stage of male middle adolescence becomes a way of life, a way of being in the world – the template for the neutral-or-pissed-boy/man.

Observation of adolescent males and females often reveals that, while a “clique culture” undoubtedly exists within both genders, there is a homogeneous subtext across female groups that does not exists among male groups.

When young males individuate, they tend to split in a dramatic way. This can lead to a sense of social isolation not necessarily felt by females. No matter the extremity of the differences between female groups there is a shared bio-social experience that is unavoidable. Here, again, we have fodder to feed the covert male depression/no sense of grounded social identity motif that drives the underlying Peter Pan complex.

How do we foster a sense of progressive social development into manhood that also promotes emotional intelligence in a culture where apprenticeship is dead, confirmation is a gesture, the bar mitzvah is about the money, and organized sports teach us more about winning and not losing than about leadership and teamwork?

Given the strictures imposed by cultural momentum, it would seem that, just as re-parenting is sometimes necessary to divest ourselves of the motifs engendered in childhood, a program of male self-initiation is in order. It suggests that, as there are few or no points of reference to define us, that- in order to find ourselves, we must define ourselves.

According to psychiatrist and author Abigail Brenner, “The simple act of participating actively in our own lives is a giant step toward taking back personal responsibility for how we choose to live, with who we choose to share our experiences and for how we choose to define ourselves in our community and in our world.”

The need for personal rituals in increasingly fragmented societies may be greater than ever. We all see this every day, Facebook is full of posts such as “7 ways to be happier” or “10 ways to get what you want in life”.

Is there a solution?

Bro. Dennis Chornenky, Past President & Founding Member of The Masonic Restoration Foundation in an article titled “Introduction to Freemasonry” states that “the general work associated with the initiatic tradition and the purpose of Freemasonry, put simply, is to provide an environment where good men can come together to pursue meaningful intellectual and spiritual growth. It is often said that Freemasonry “makes good men better.” One of the underlying tenets of the initiatic tradition is the belief that with each individual that becomes a better person the entire world profits. Being part of the initiatic tradition is what distinguishes Freemasonry from purely social or philanthropic organizations. While there are many different organizations that contribute large sums of money to charity, offer fellowship with like-minded men or provide education, Freemasonry is unique in that it embodies all these things, but is actually focused on offering men a traditional initiation into the mysteries of life and death. The initiatic tradition is the core, defining characteristic of Freemasonry, without which there would be nothing to differentiate Masonry from other social or philanthropic organizations.”

I see some a glaring problem presented. Thomas Worrel in an article titled The Initiatic Symbolism Of Freemasonry reminds us that:
“Freemasonry is set up in such a way that even application for membership conforms to its symbolic purpose. The candidate must meet certain requirements before applying. He must be an adult, and he must not be a slave or a dependent. This is crucial psychologically, and means that one must possess a certain degree of maturity and independence before becoming a Mason.

The candidate must also petition for membership; he cannot be solicited, but must ask of his own free will and accord. In addition to these preliminary qualifications, the lodge must find him to be worthy of admittance; that is, the candidate must through his own efforts and nature be an upright and moral person.

Psychologically, the procedure preparing one for Masonic affiliation corresponds with the ego’s first glimmerings of a higher destiny. This event in one’s life, that of turning towards the Light, can be likened to the Annunciation, when the angel says to the virgin, “You have been chosen.” A seed has been planted in the aspirant’s soul. This state is very important, for it entails an initial longing for a more spiritual life. The impulse really originates from our deepest self. In Freemasonry, we are taught that the first preparation for initiation is in our heart.”

So, we as Masons, must wait for those men who not only recognize but also acknowledge the lack of the benefits of initiation in their lives to seek us out. For those that need it most this presents a large problem. We understand the benefits, but do others? How do we reach those that need it the most? Perhaps adding organizations like Big Brothers to our supported charities and efforts? I don’t know but would ask that we consider these issues in our daily lives and meetings.

The vast majority of the above comes direct from the sources below. My “”’s may not be all there and encompassing per collegiate standards since this was put together for a presentation.