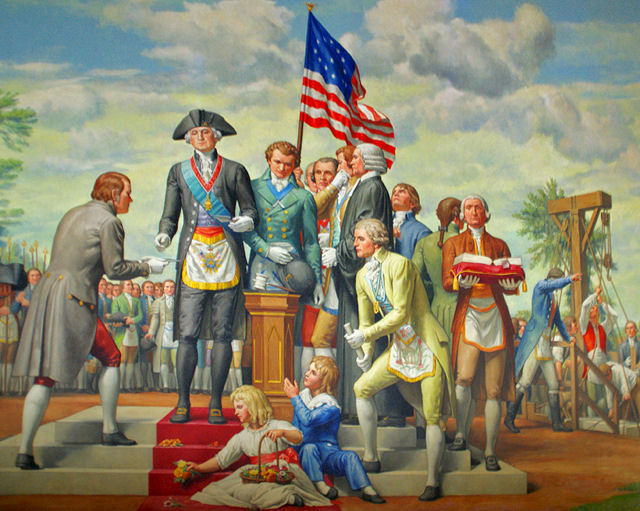 A Little about Freemasonry

The Freemasons are the world’s oldest fraternal organization. Masonry got its start in Scotland about 400-500 years ago, and is reputed to be directly descended from the Knights Templar of the early Medieval age. Masons were originally skilled craftsmen, very much like Weavers, Carpenters and the like. As with other crafts, they formed trade guilds and early unions in the 1500s, but the Masons were different. While other trade guilds permitted the occasional speculative, or non-skilled member to join their ranks, Masons transformed into an organization of “intellectual gentlemen” sometime between 1550 and 1700. It is not recorded exactly how this transformation came about, but the key feature for Masonry was its change from a trade union adhering to the doctrines of the Catholic Church, to an organization favoring religious tolerance and friendship among men of differing beliefs. Indeed, this principle continues to this day as one of the foundations of Masonry, where anyone with a simple belief in God is acceptable as a member.

When one petitions to join a lodge of Freemasons, he is joining an organization rich in history, and steeped in tradition and ritual. While there are a number of appendant organizations, the Masonic Lodge, or Blue Lodge as it is known, is core of the organization. All Shriners for example, are Masons as a prerequisite to joining the Shrine.

Once your petition is accepted, you can look forward to passing through a series of rituals in the process of becoming a member of a lodge. While having your petition accepted makes you every bit as much of a Mason as the senior-most member, the rituals you pass through are a part of the common experience of all Masons throughout the world, and form a common bond. The three rituals are called degrees, and are known as the Entered Apprentice, the Fellowcraft, and the Master Mason Degrees. The Degrees are usually given over a period of several months, and interspersed with periods of education to teach new members of the fraternity about Masonry and its history and rituals, along with its principles.

Keep in mind the following considerations:

Do you believe in God? Freemasonry is not a religion and does not prefer one religion over another, a person’s faith is his own; however, a belief in a Creator, an Architect of the universe, or more frequently referred to as God is one of the things that join Freemasons together. No atheist can be a Mason.

Do you feel that there’s more to life than just financial success? Masons know that self-development–character and conduct is essential in life.

Are you willing to allow others the same right to their own beliefs that you insist on yourself?Masonry insists on toleration – on the right of each person to think for himself in religious, social and political matters.

Would you like to be part of a group that wants to make this world better? Masonry as a group gets involved with the community, whether it means helping children, sponsoring a teacher, feeding the needy, giving scholarships to students, helping the aged and sick and helping one another.

Do you love our country? Not any political party or person, but the fact of the United States of America. No Florida Lodge may be involved in politics; however, what an individual member chooses to do in connection with politics is that individual member’s choice.

Do you have an interest in the esoteric, allegory, images with hidden meanings, the mysteries of history. Are you interested in the groups that are referenced in movies like National Treasure, Indiana Jones and the Last Crusade, books like The DaVinci Code and Angels and Demons, how about the Holy Grail? Modern Freemasonry began in 1717 in the United Kingdom, it unquestionably goes back hundreds of years earlier, some see it’s origins even thousands of years earlier.

Are you interested in being a member of a group that one-third of our U.S. Presidents have been a members of? Many famous politicians, writers, actors, directors, inventors, soldiers, explorers, and athletes have been masons. For a link to many famous masons: http://www.os2ss.com/connect/masons/famous.htm. Whether famous or not, we welcome good men who want to become better. Currently there are over 50,000 Florida Freemasons throughout the world there are millions in nearly every country.

If you answered yes to these questions then you will appreciate Freemasonry.

If you are interested in learning more about Freemasonry or about Hibiscus Lodge located in Miami, please fill out the follwing contact form and we’ll get in touch with you as soon as possible.